🤼 Fighting Emoji: Wrestle Your Stress Away With Online Fighting Games 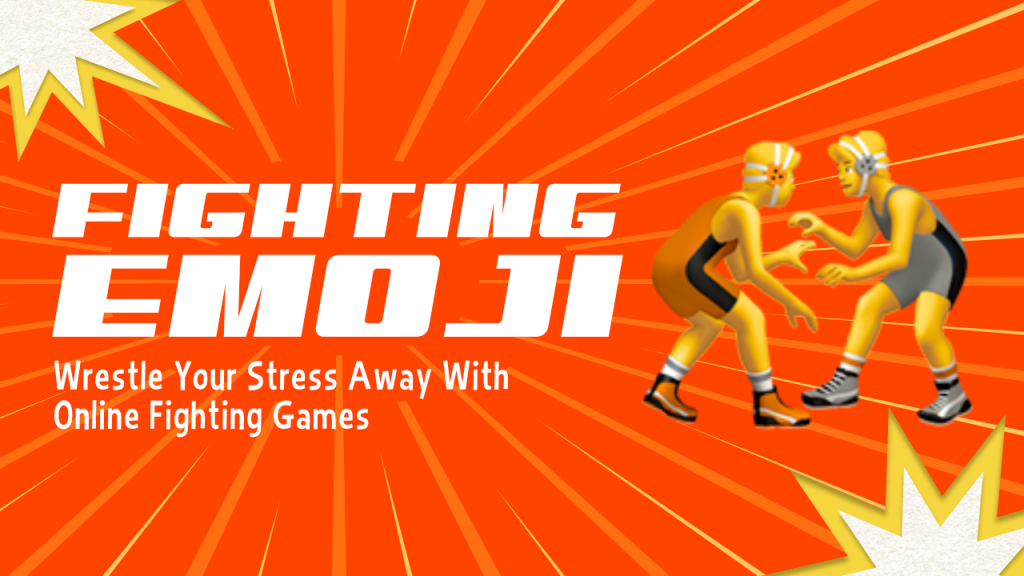 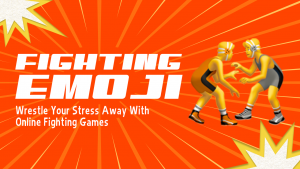 Fighting games are popular with people of all ages. Research shows these games are an excellent method to relieve tension. Nowadays, many people are seen glued to their devices, playing games, sharing a 🤼 Fighting emoji or two on social media after. At first sight, the concept of playing a fighting game to reduce one’s stress might seem rather weird. But it works!

Online Fighting Games And Fighting Emoji As A Way To Unwind 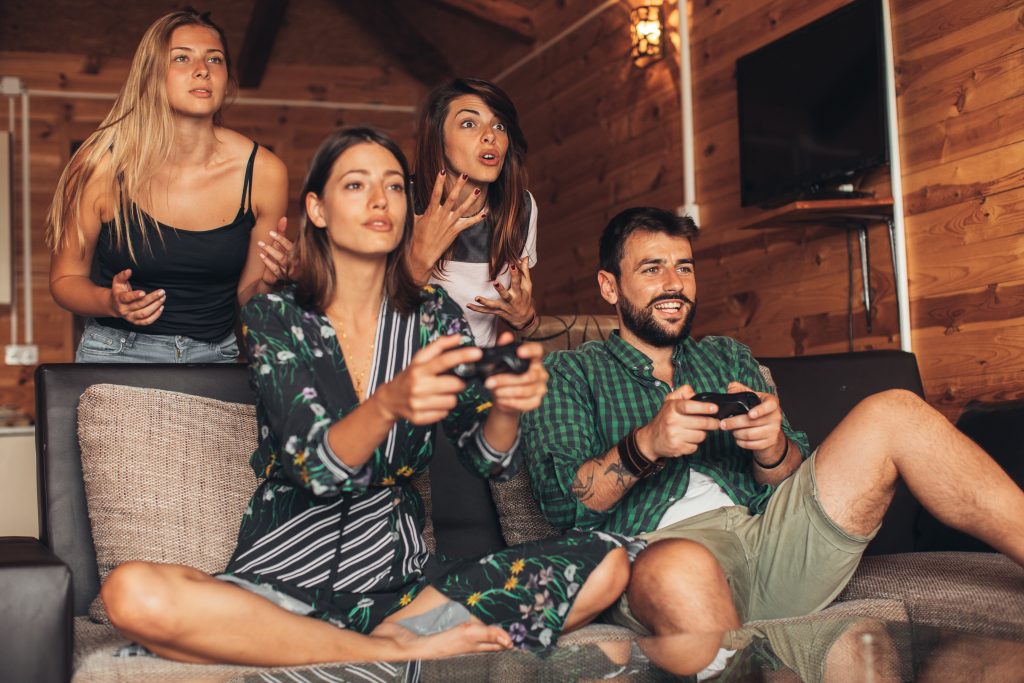 The third reason why playing video games reduces stress is because the activity results in meaningful social connections. Any gamer can tell you, in the gaming world, making friends is easy, however, maintaining these friendships may become somewhat difficult. Social media can help with that.

Merging Of Social Media And Gaming 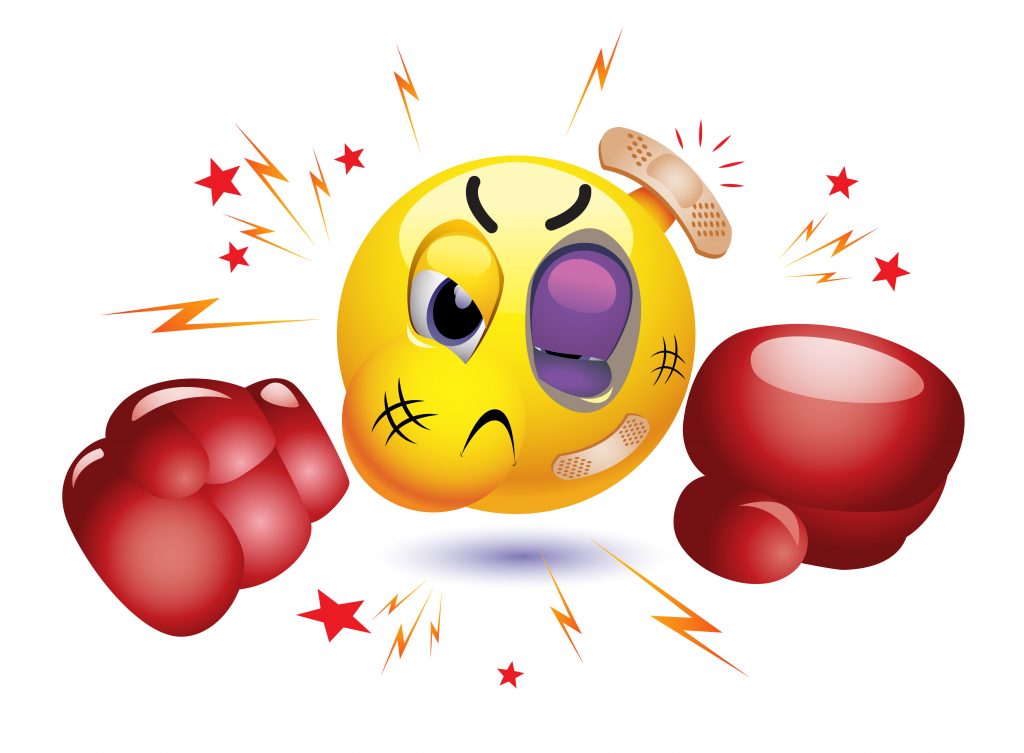 For instance, if you happen to find a fellow gamer on Facebook, Twitter, Instagram, or even Tiktok, you can very easily instigate a conversation with him or her without having to deal with the pressure of an intense win-loss, on-site event.

And when you do so, inserting a fighting emoji to your email, chat, or post is an added cherry on top, an additional great way to get the attention and support of fellow gamers. Inserting the emoji will also help if you’re an aspiring gaming influencer! 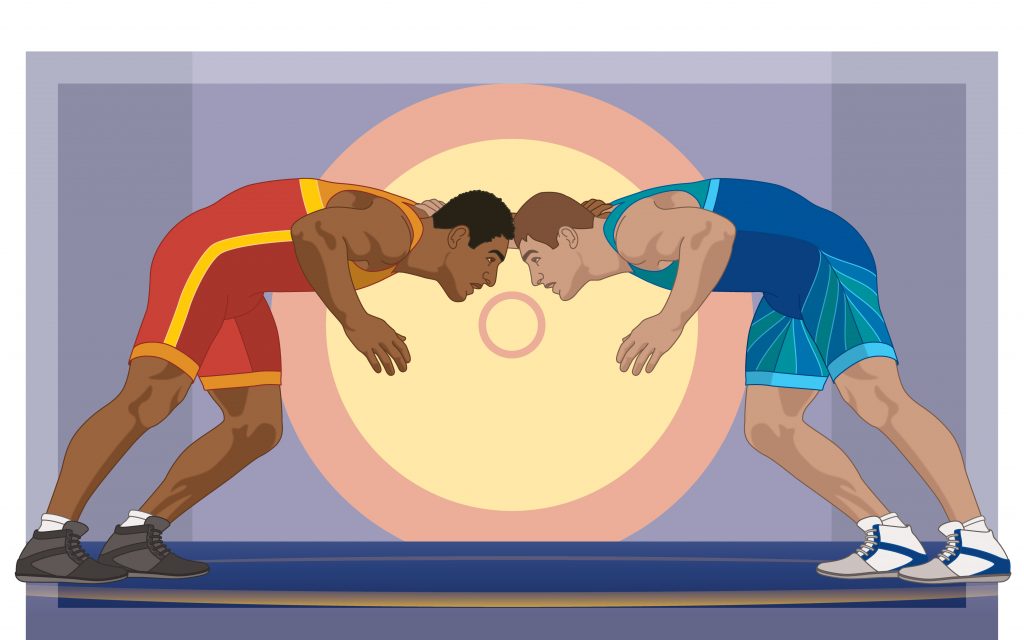 Here’s more evidence we dug up to back this up. A study made by the Emoji Consumer Science Team states, nearly 92 percent of the online population uses emojis to express themselves. And, with the introduction of emoji keywords apps, this statistic appears to be growing. In addition, there are newer features on smartphones that can help you quickly “emojify,” your text faster, easier, and clearer.

Excited and ready to start your fighting emoji journey? Here’s a quick guide on how to use, and everything else you should know, about the popular🤼fighting emoji.

The 🤼 Fighting emoji, also known as the 🤼 People Wrestling emoji, shows two people dressed in different colors pushing one another, facing each other. You’ll often see this symbol in topics about wrestling, and other types of competitive sports. This emoji has zero color variations, and was first seen in 2016 when it was introduced to the public as a member of Unicode 9.0, version 9.0 of the Unicode Standard.

Fighting Emoji: How It Came To Be

On June 21, 2016, the Unicode Consortium, a non-profit group that handles text expressed in digital writing systems, approved 72 emoji characters and six new scripts as part of Unicode 9.0 These scripts added support for lesser-used languages around the world, such as The Warsh orthography for Arabic, which is widely used in North and West Africa.

In many ways, Unicode 9.0 was quite the random batch. Why do we say so? Some of the symbols in this group were animals like 🦍 Gorilla, 🦌 Deer, 🦇 Bat and 🦅 Eagle emojis and various items such as 🥜 Peanuts, 🥞 Pancakes, and 🥖 Baguette Bread emojis

Can you imagine, in this batch, only four icons fell under the category of people, the 🤼 People Wrestling emoji, 🕺 Man Dancing, 🤰 Pregnant Woman and 🤸 Person Cartwheeling emojis? Why that is so, we do not know. What we do know is that, in the same year, the fighting emoji was added to another group, Emoji 3.0.

Can’t wait to flex what you learned? Before you go and share the fighting emoji on your email, social media, or chat apps every day and every night, we highly recommend you do a test run first to see how it will look on your device.

If you have an iPhone and your best friend has an Android device, you’re probably aware that emojis can sometimes get lost in translation. This happens to not only iPhones and Android gadgets. Each app and operating system has its own set of emoji designs.

When Unicode approves and releases new emojis, which is something they do regularly, iOS, Android, macOS, Windows, Linux, ChromeOS, and other vendors revise the artwork when they adopt the emoji to their own device, to match their audience market and their users.

For the fighting emoji, at the onset, all the icons are in typical wrestling clothes and apparel, the color of what they’re wearing is really what sets them apart. Apple’s version shows one player in orange with a black stripe design, and another player in gray, with also a black stripe.

Meanwhile, Google’s icon stands out the most because of its colorful pieces. One player is in a bright blue shirt, shorts, and shoes, while his or her opponent is working up a sweat in a striking orange sleeveless top, shorts, and shoes with white socks.

Designs on the other platforms

On quite an interesting note, if you were to take a closer look, Windows’ artwork shows the players wearing the very same color Google has. However, unlike Google, Windows’ emoji is surrounded by a black border and there are zero designs and details on their faces.

Twitter’s version simply shows a yellow face, as well, with no eyes, nose, mouth, or ears. One player is in a grey top, shorts, and shoes, while the other opposing player is dressed in an all-orange outfit. Samsung displays both players decked in orange wrestling attires, from shorts, to shoes, to shirt.

Lastly, Facebook and JoyPixel have similar designs, both featuring one player in orange, while the opponent in red. Both athletes are wearing black shoes with white socks.

Hairstyle Variations of the Fighting Emoji

Another variation in the depiction of the fighting emoji lies in the color of the players’ hair. Apple and Twitter’s wrestlers have blonde hair. Meanwhile, Facebook, Samsung, JoyPixel, and Windows athletes are brunettes. On the other hand, Google’s fighting icon is the only one with players that have wavy hair. Truly, no two fighting emojis are alike! 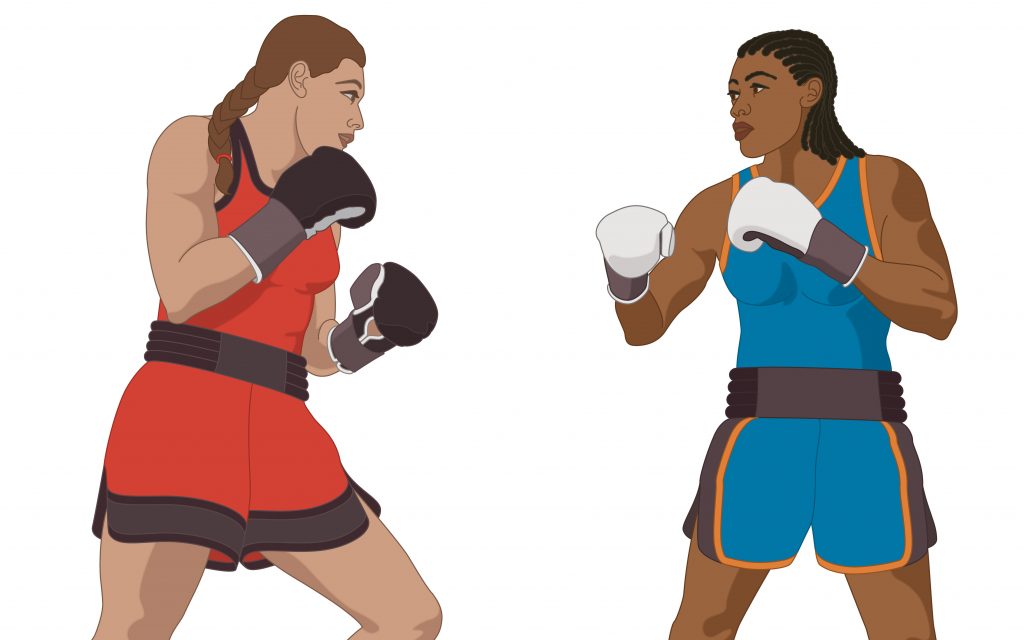 Variants of gender and skin tone are made to better represent the diversity of people and couples on the planet. If you’re aware of the gender of the person you’re talking to, you may use these symbols. But if you’re not 100 percent sure, a gender-neutral emoji will do.

Use The Fighting Emoji To Share Your Online Fighting Adventures 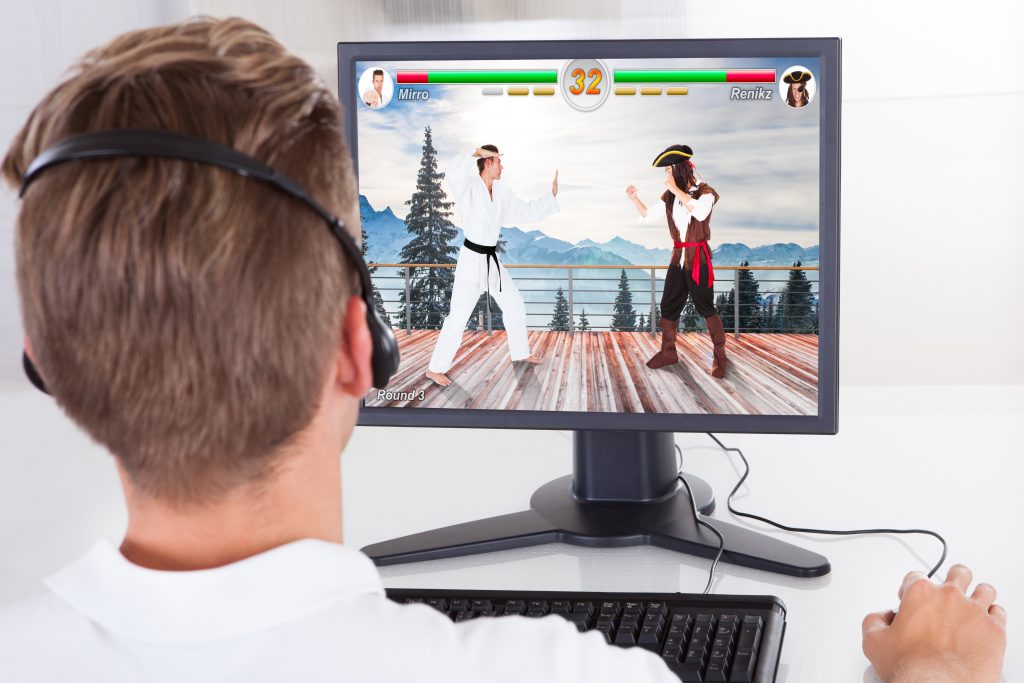 Now that you’re more familiar with the fighting emoji, why don’t we put into practice what you learned and received! Learn how to use the fighting emoji to enhance your messages and make your chat exciting, bright, and more fun! Check out some examples we made below:

– The most rewarding online games for me are tactical ones like Imperia Online and Call Of War that require you to analyze, think, and act quick to beat your opponent 🤼
– No budget? Found a site that lets you download 100 online fighting games for free! 🤼
– Years ago, gaming was more of a hobby than a profession. Now, gamers make more than office employees when they win online tournaments 🤼

Fighting games can be intimidating to newcomers and difficult to master. But not all games are as hard as they seem. In fact, there are ones perfect for beginners! Check out our latest picks below. 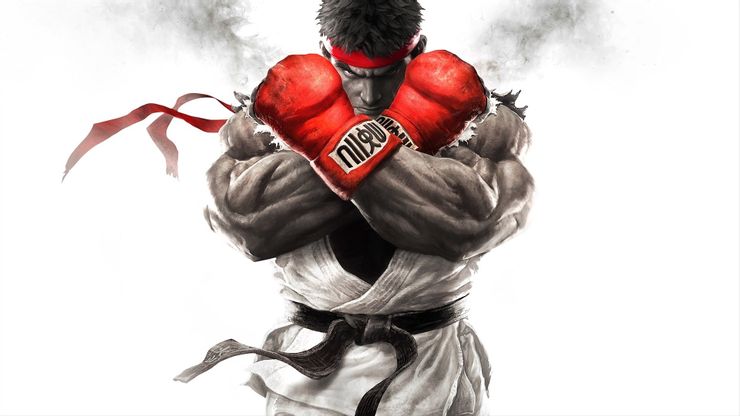 Street Fighter is one of the online fighting genre’s heavyweights. While this game may appear to be quite intimidating at the onset, it’s got many resources at your fingertips, ready and willing, and available to assist you as you go down your first few steps down the path of a warrior.

With such a large community to practice with, it’s difficult not to find a training partner with whom you can sharpen your skills. Combine that with the game’s relatively simple mechanics, and you have the ideal game for introducing the genre. 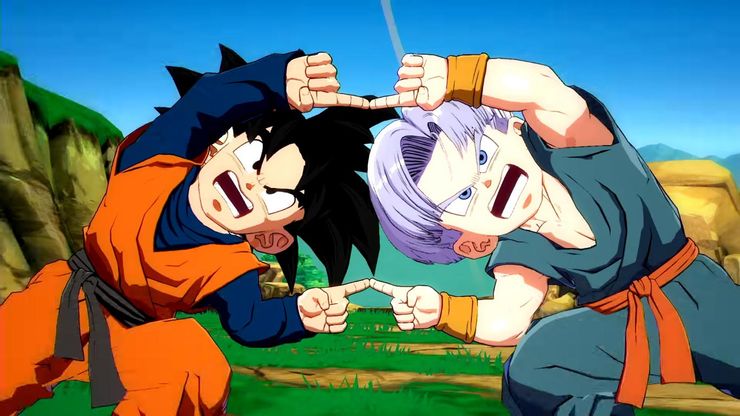 While the game’s mechanics aren’t the simplest, Dragon Ball FighterZ introduces a diverse set of systems without drowning players in too many details. Not to mention the incredible graphics and animation that give you the impression that you are controlling the anime.

Instead of the traditional head-to-head battle, FighterZ provides three fighters that can be switched on the fly. The special moves are cinematic enough to keep players interested long enough for them to learn the mechanics. Above all, it captures the spirit of fun that fighting games are supposed to be. 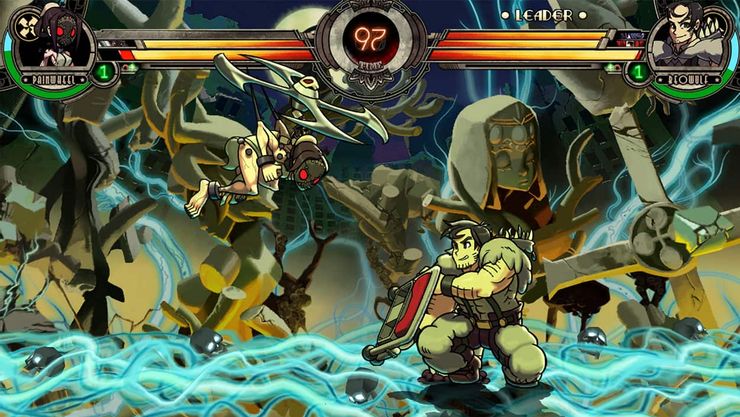 Skullgirls is the undisputed, most popular indie game that’s taken over the fighting game community. And it’s not that easy to play because it’s got a lot of characters and plenty of twists and turns. For some, it stands to reason that a smaller scale game would be a good place to start for a new player, with a smaller roster of characters and less overwhelming mechanics.

The good thing about Skullgirls is that it’s got a tutorial that covers more ground than most fighting games. It’s true that every fighting tutorial teaches you how to throw a punch or a kick? But no one responds to the questions “When?” or “Why?” you should throw that move. That is, until now. Skullgirls explains things thoroughly, is an excellent introduction to a more complex fighting game, and provides you with all of the necessary tools to succeed. 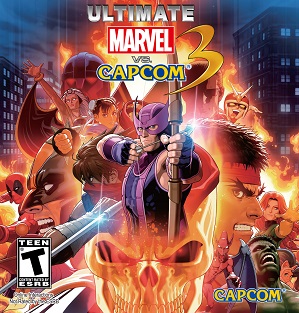 Ultimate Marvel vs. Capcom 3 surprisingly isn’t very brutal to the uninitiated, especially since it’s a game that has been praised for its intense high-speed battles.

Truthfully, playing it is easy peasy. Basic attack combos are as simple as hitting the light, medium, or heavy and then following them into the air and repeating. It’s also very easy to perform team combos. These simple actions make players feel incredibly savage when they juggle their opponent across your entire team, even if, in reality, all they’re really doing is just a TON of button mashing. 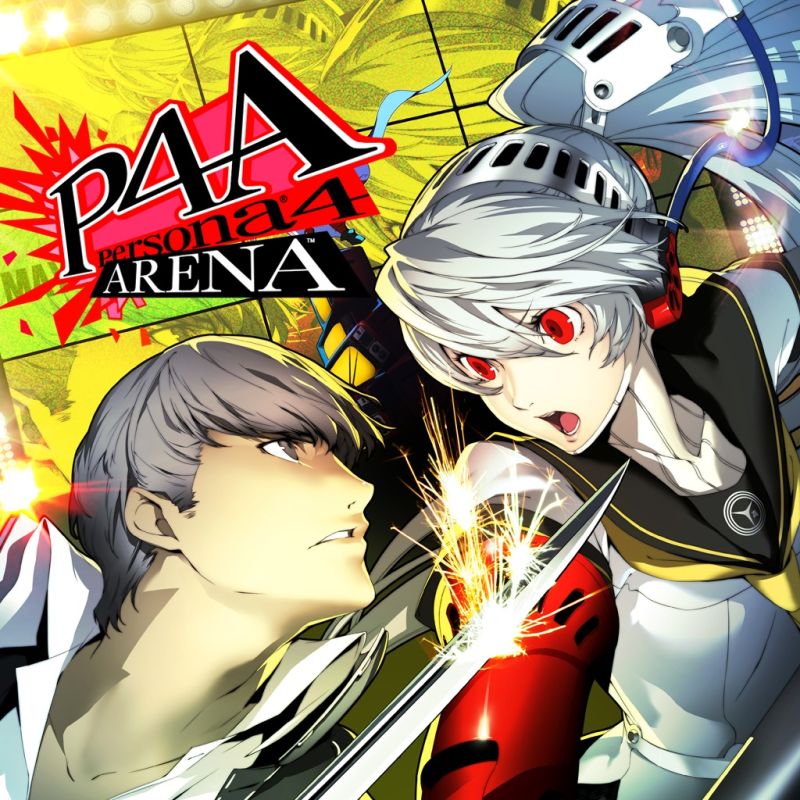 Playing Persona 4 Arena is definitely a unique experience. It’s an Arc System Works game, which means its airdashes, and cancels and brutal full damage combos do tend to alienate players, but the game makes up for it having something considered to be quite rare in the gaming world: auto combos.

No, the game does not do everything for you, but whenever you land an attack, you have the option to mash your light attack to do a low damage combo. It may appear to people who are not new to the series that the game and its creators are belittling the players, by making it too easy. But for the newbies, most of the time they’re just happy to be doing some cool combos while watching their online opponent’s health vanish as an effect of it. 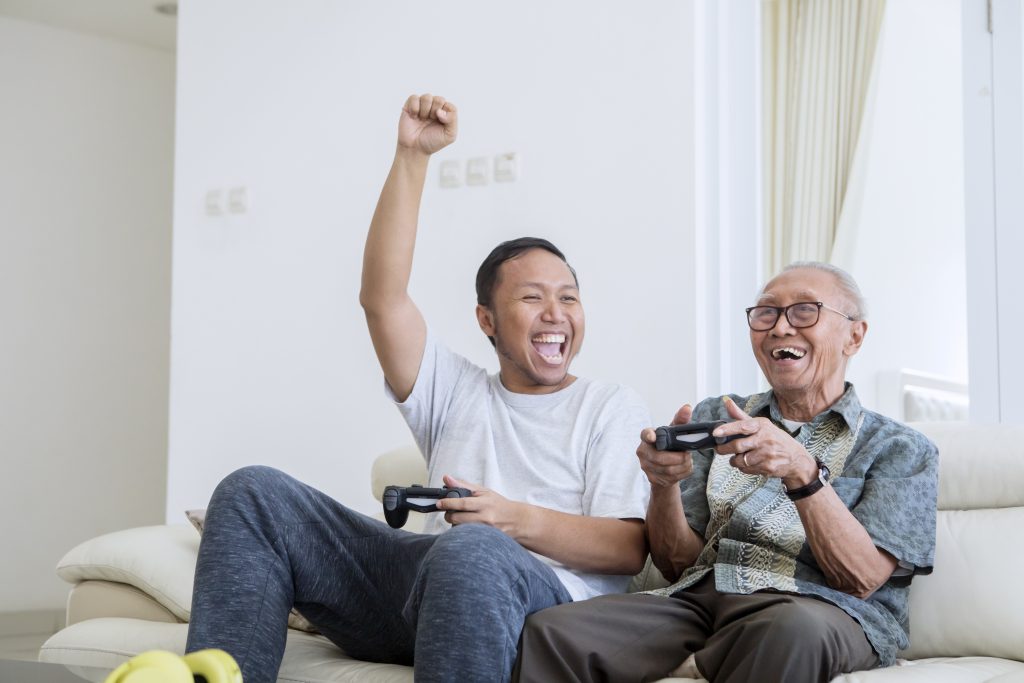 Furthermore, contrary to popular belief, not only teenagers play video games. According to a recent survey, by website Statisca only 21% of gamers were under the age of 18! Games aren’t just for the young ones anymore! Clearly, everyone’s fallen under the gaming spell!

This means, when you start talking about online fighting games on your chat apps or social media apps, with the 🤼fighting emoji in tow, you better get ready for a lot of attention! 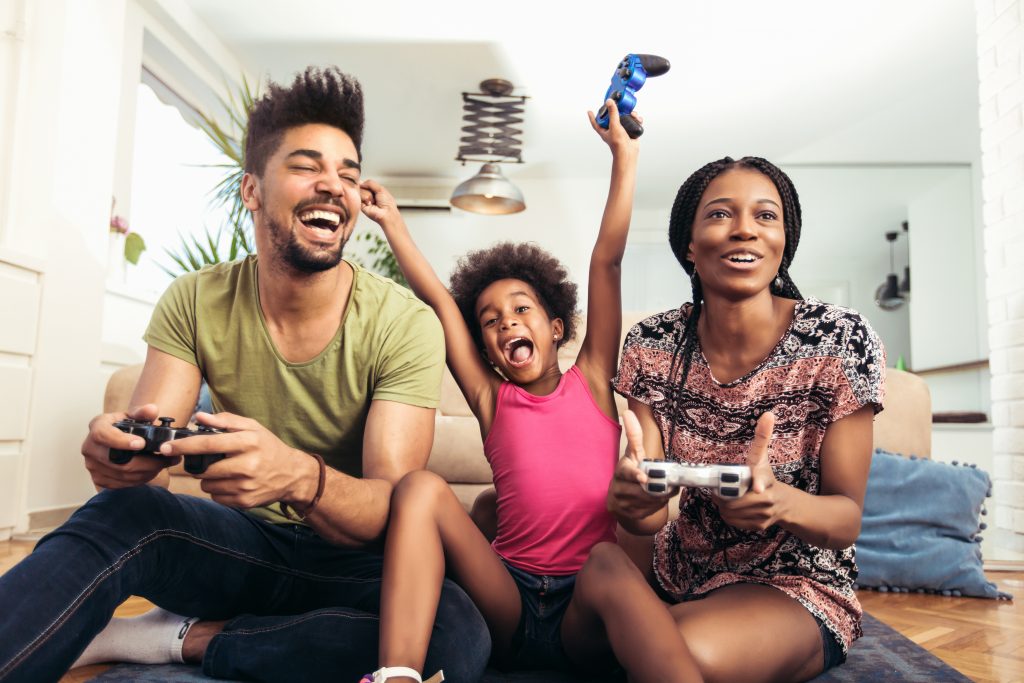 On a separate note, have you ever found it hard to interact with your kids or game-loving friends and family? Aside from being an enjoyable and super popular pastime, gaming can provide a way for people to interact with one another- including those difficult-to-connect-with people in your life. These may be your kids, grandkids, or even mentally challenged individuals who have difficulties with traditional modes of communication.

Truly, gaming can make your life better in many wonderful ways as long as you use it the right way- play responsibly, take plenty of breaks and make time for other activities throughout your day. Don’t let it control you, and it won’t! So, what are you waiting for, go and get your game face on! See you at the next tournament!