🌙 Moon Emoji: Show Your Love To Infinity And Beyond With This Popular Celestial Symbol 🌝 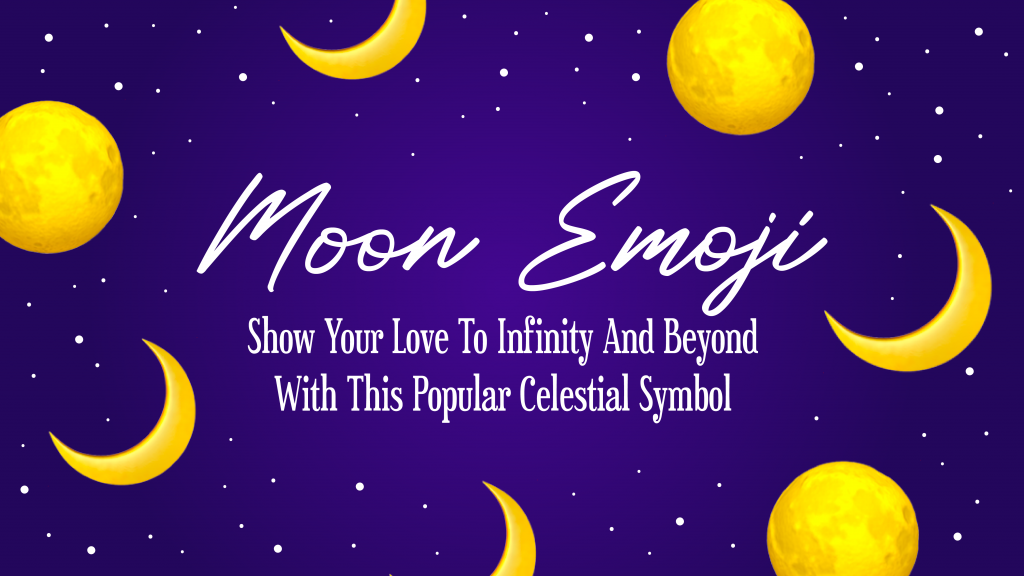 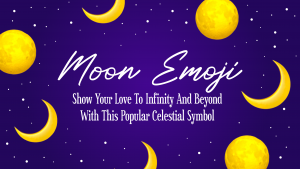 One of the first things that come to mind when thinking about the night sky is probably the Moon in all its beauty, eternally glowing in the darkness. Indeed, Earth’s nearest celestial body has always had a special place in our hearts and minds. In fact, it’s so important to us, it’s been given a slot in the world’s first truly universal form of communication- the language of emoji. We’re talking about the 🌙 Moon emoji, of course!

Out of all the moon emoji variants, the 🌙 Crescent Moon is an undeniable favorite. It’s used in conversations about the moon, or about anything that happens at night. But sometimes, it’s seen as a sign of romance and intrigue. In addition, the crescent moon and star is a well-known symbol of Islam around the world.

In the 🌙 Crescent Moon emoji, the moon is depicted as a slender, golden crescent, curling to the right. It’s pretty much how we see the Crescent Moon in real life. 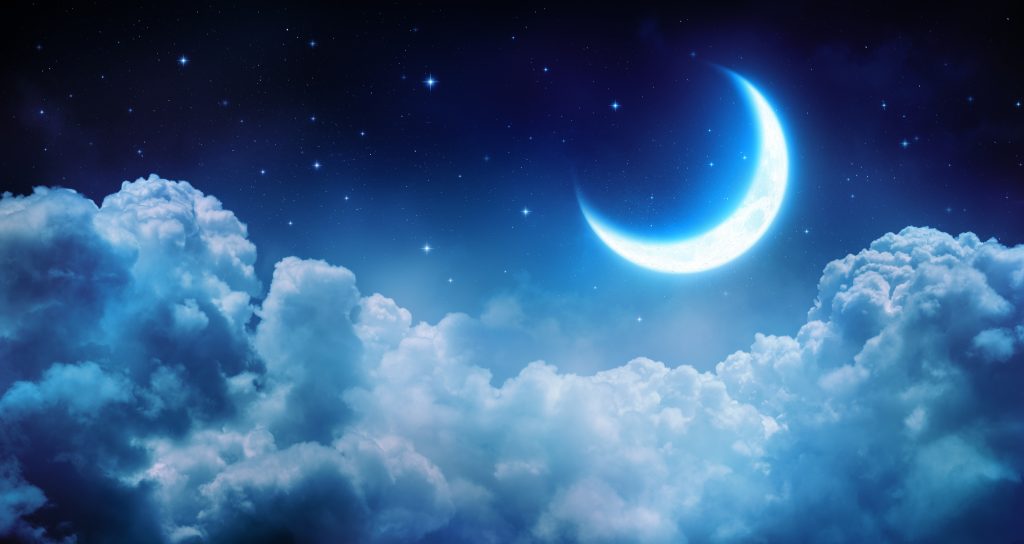 Out of all the phases of the Moon, the first quarter Moon, symbolized by the crescent form, is the most captivating. Crescent Moons are symbolic of new beginnings, a fresh start, and rebirth. The fascination people have for this symbol could be why the various applications of it are equally popular – from crescent moon jewelry and tattoos, to the popular 🌙 Crescent Moon emoji.

Want to send the moon emoji to someone? The simplest approach is to pluck it out of our extensive emoji collection and then copy and paste it. But, it won’t look the same on all devices. Remember, platform vendors like Apple, Samsung, Google, use their own emoji images and designs on their products. So, before you begin posting that emoji, see how it looks from your device first!

The good news is, the 🌙​ Crescent Moon emoji looks similar across most platforms. So you don’t have to worry about this, at least!

How To Use The Crescent Moon Emoji

Emojis are one of the most useful 21st-century shorthand communication tools. Unless you’ve been living under a rock, you just can’t argue with that statement! They’re so popular, emojis appear in over half of all Instagram comments and captions, and using one on Twitter can result in as much as a 25.4 percent increase in interaction.

Moreover, a well-placed icon or emoticon can make your audience laugh and feel good. Learn how to elicit the reactions you want, with the use of the 🌙 Crescent Moon emoji, by studying the examples we’ve made up below.

– I cannot stop staring at your lovely face. You are as beautiful as the 🌙 out tonight!
– Jenny chose the drawing of 🌙 for her new tattoo as a reminder to always follow the laws of Islam.
– For some, the 🌙 symbolizes one’s connection to their ancestors.

– How was your ​🍯​🌙​ in Las Vegas? Were you able to watch one of your shows there? [What it means: honeymoon]
– When I hear Pitbull’s songs played at the club, I feel like I could ​💃​🔄​🌙​ [What it means: dance all night]
– Get me a bottle of Red Bull at the store please. ​🚫​💤​2️⃣​🌙​ because of the big report I need to submit tomorrow [What it means: no sleep tonight]

The existence of a 🌕 Full Moon emoji should not surprise anyone. Known as the shadow of the sun, the moon has always been a popular mystical symbol in our history, owing to its phenomena that have a direct impact on our planet. Yup, whether you realize it or not, the moon affects ALL our lives. If that revelation surprised you, stay tuned, we’ll talk more about that later!

To make the best use of a symbol, we need to know what it is, and what it stands for, right?

The 🌕 Full Moon emoji depicts the fifth phase of the moon. A full moon is the backdrop of many spooky stories, involving creatures like werewolves or witches. People are said to act weird during a full moon and it is also claimed to induce labor in pregnant women.

You’ll see this symbol in conversations related to nighttime activities, celestial bodies, or as a simple afterthought to a good night wish. Some use it as they would a smiley. In some cases, like in Turkey, for example, the moon is a symbol of their nationality. The National flag of Turkey features a red background, and on top of it, is a white moon. 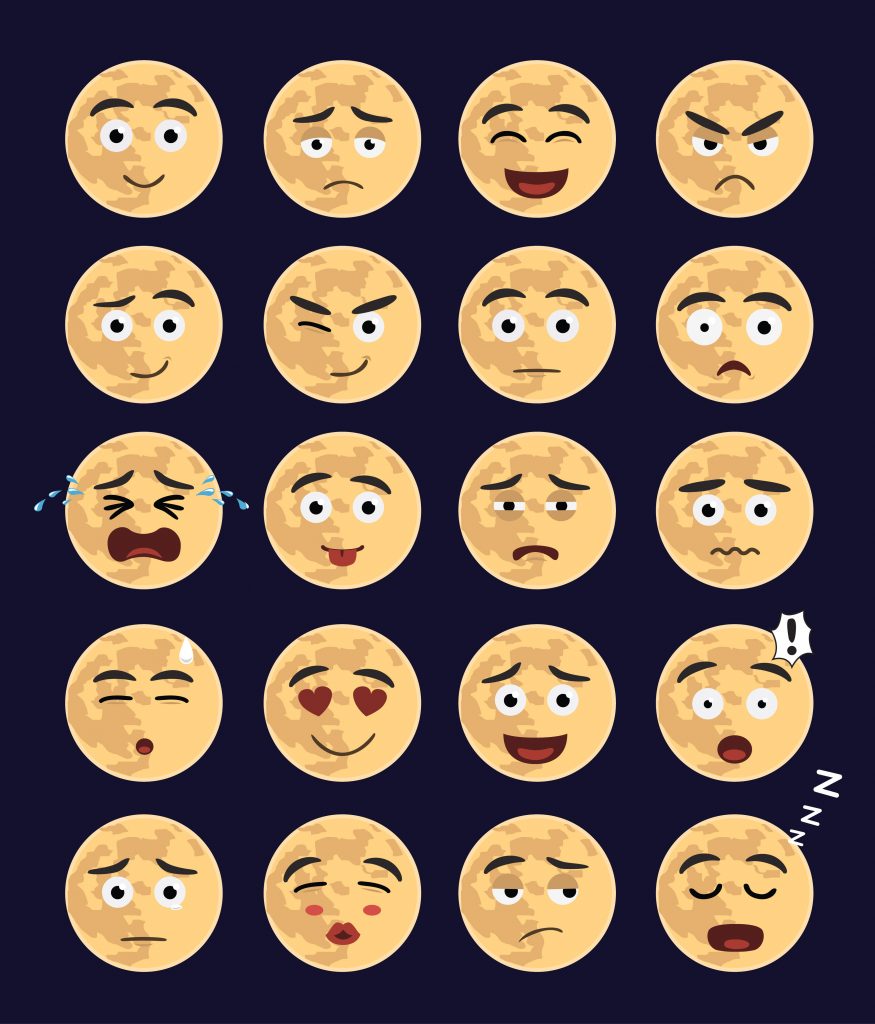 In October 2010, the first Moon emojis were added to smartphones. These emojis were part of Unicode 6.0, the first major version of the Unicode Standard to be published exclusively in the online format.

Five years later, the 🌕 Full Moon emoji was added to Emoji 1.0, the very first release of emoji documentation from Unicode. This was a very big batch- all emojis approved between 2010-2015 were a part of this.

Out of all of these, the 🌙 Crescent Moon emoji is one of the most popular.

One obvious difference is Facebook’s version, it is the only 🌕 Full Moon emoji that is gray! All the rest are either yellow, or light yellow. If you look closely, you’ll see, Google, Windows, and Twitter’s version comes with a smattering of spots. On the other hand, Apple and Samsung’s icon has small patches instead of circle. Also, Windows’ 🌕 Full Moon emoji is the only one with a black outline. All of Windows’ emojis appear with a black border, and their moon icon is no different.

How To Use The Full Moon Emoji

– Don’t forget to catch the 🌕 out tonight! Be on the lookout for werewolves howling with all they’ve got!
– Goodnight! 🌕 Don’t let the bed bugs bite!
– During the 1950’s the USA considered detonating a nuclear bomb on the 🌕 This was during the Cold War, to show Russia they weren’t lagging behind in the space race. I’m glad that didn’t happen!

Using The Moon Emoji On Your Devices

Here’s a quick tutorial on how to use the moon icon on some of today’s most popular devices:

Before that, a word of caution – the 🌙 Moon emoji may not appear if the application or site you’re accessing does not fully support Unicode. So, make sure your gadget is Unicode-compliant before anything else! 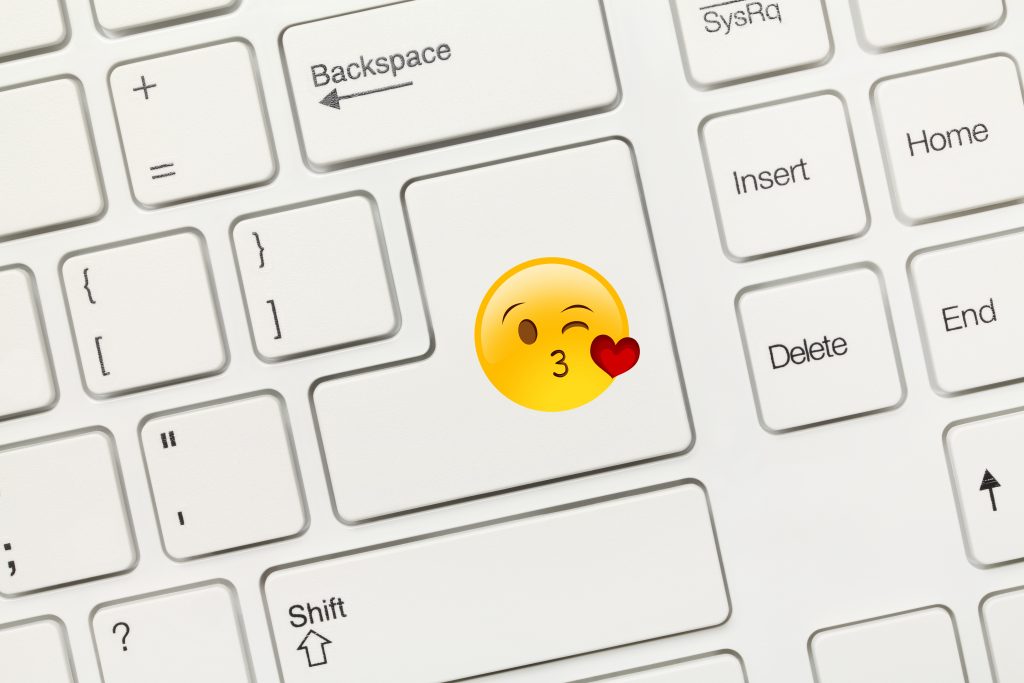 You may set up the Windows keyboard model in such a way that you can quickly and easily attach whichever icon you desire. You can modify the complete Windows keyboard layout or use third-party apps. This approach can be used to add the moon sign, as well as any other emoji character, to your keyboard.

Another effective and quick way to send emoticons is using the Windows Character Map. On Windows, you must get to the Character Map using the search bar. After that, you can choose the type of icon you want to email or utilize. 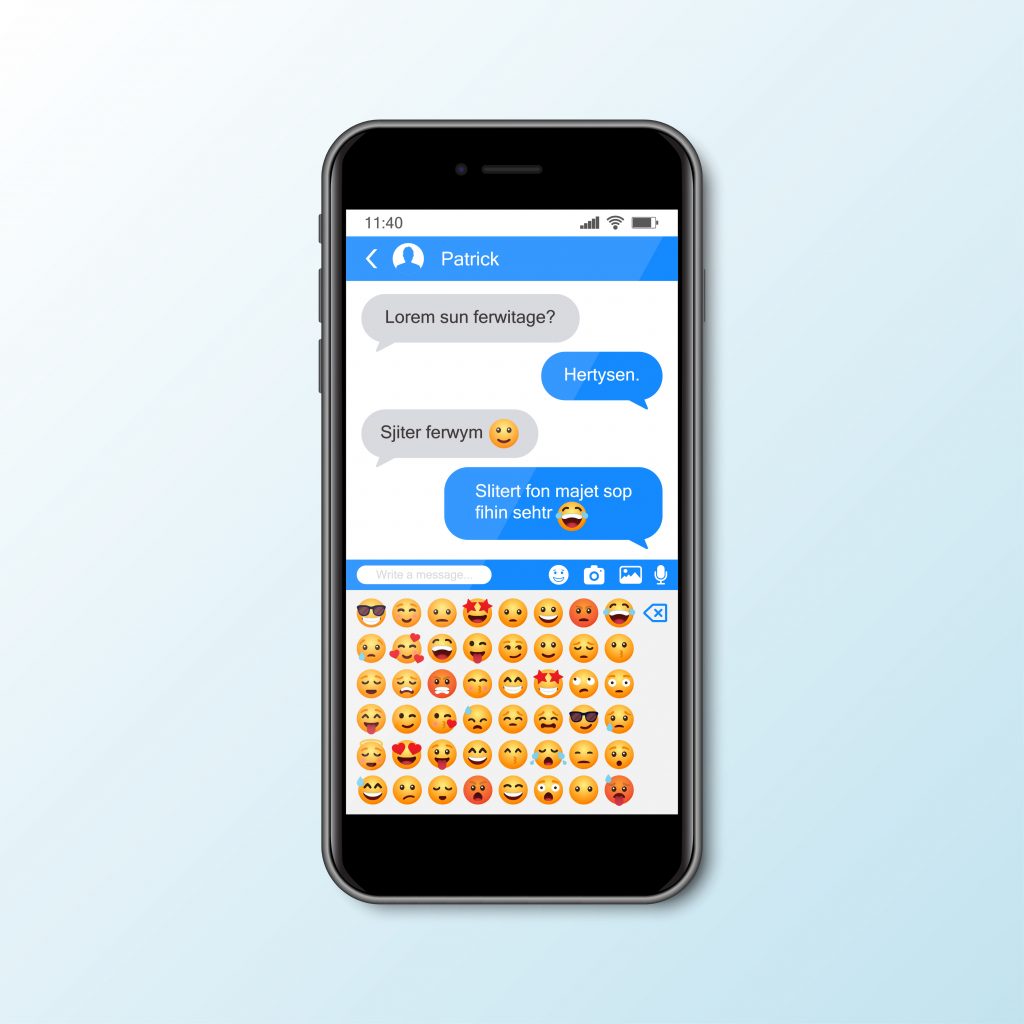 Direct Emoji Input is a fantastic breakthrough that allows you to send all of your favorite emojis to a variety of huge websites. Basically, it is a menu available on messaging apps like Facebook Messenger and WhatsApp. The menu is usually represented with a smiley emoticon that serves as a button.

Each iPhone or iPad as an emoji keyboard contains a large number of emojis and symbols to choose from. Like the Direct Emoji Input menu, it is represented by a smiley emoji. This keyboard is available on every Apple product, allowing you to post your fave emoji anytime you want!

Got a Mac? You can retrieve your fave emojis in an additional way. Apple provides a Character Viewer, (formerly called Character Palette), which lets users insert individual characters. Once it is installed, users can enter symbols for math, East Asian languages, and other scripts.

How Does The Moon Affect The Earth? 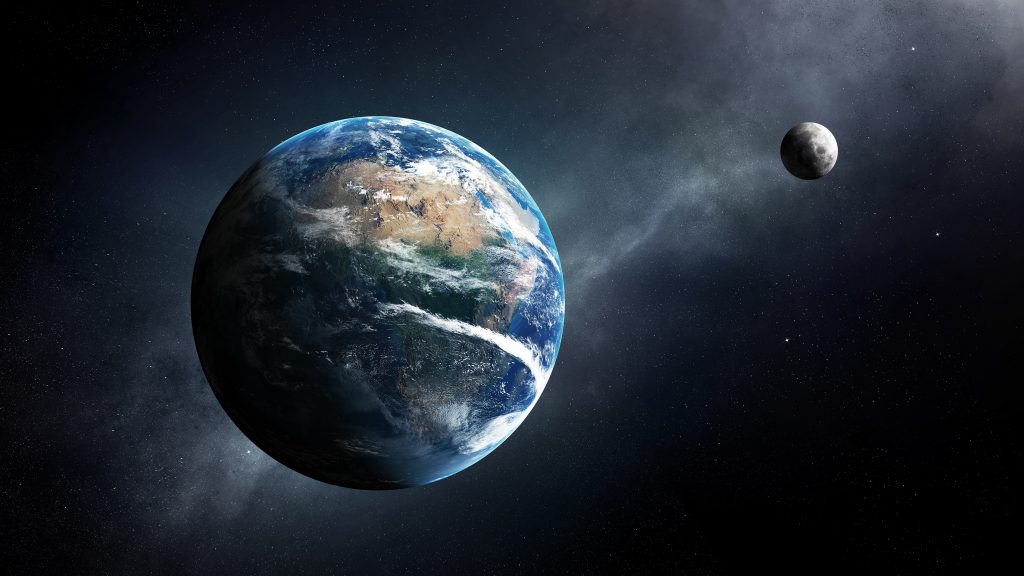 When we look at the moon, it doesn’t seem to do much. It just moves around up there, looking the same. The truth is, when two large bodies like the Moon and the Earth are close to one another, they can’t help but interact.

Over 100 years, the Moon has also slowed the Earth by around 1.4 milliseconds. It’s a minuscule quantity, and it’s caused by the friction created by the gravitational attraction between the planets. As a result of the slowing, the Moon has drifted away slightly. It won’t drift away indefinitely; eventually, it will stabilize and settle into a more distant orbit from the Earth.

Love To The Moon And Back 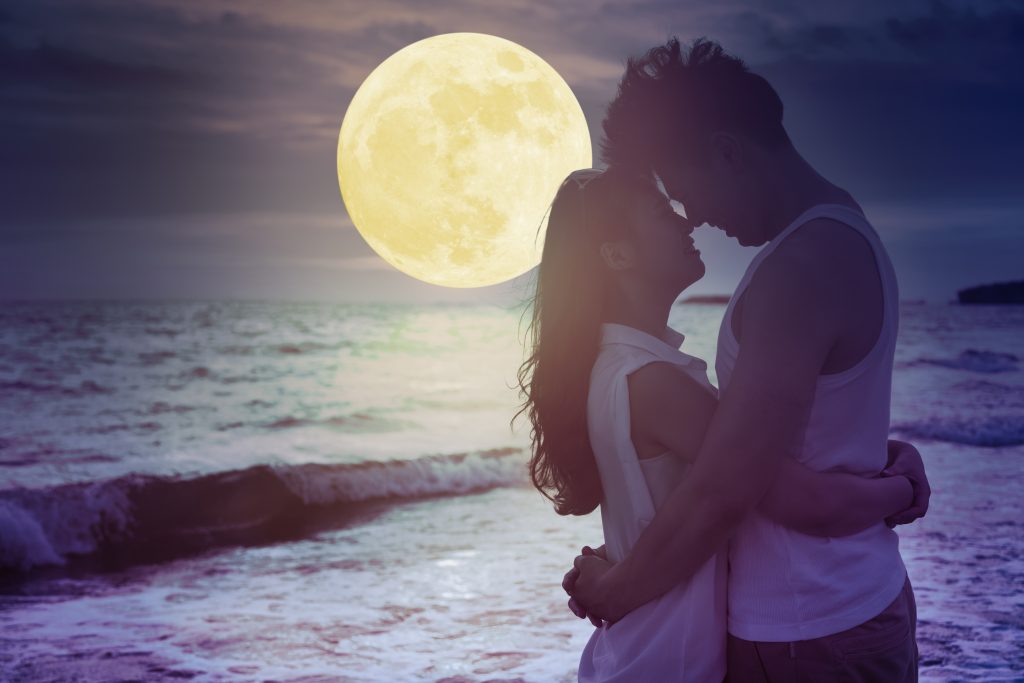 Lastly, the moon protects the Earth from space rocks such as meteorites, as well. We all know what happens when giant meteorites or asteroids hit the Earth, right? Something to think about the next time you include the moon emoji, in your email, chat, or social media post. Without the Moon, there would have been no life on Earth. There would be no us. 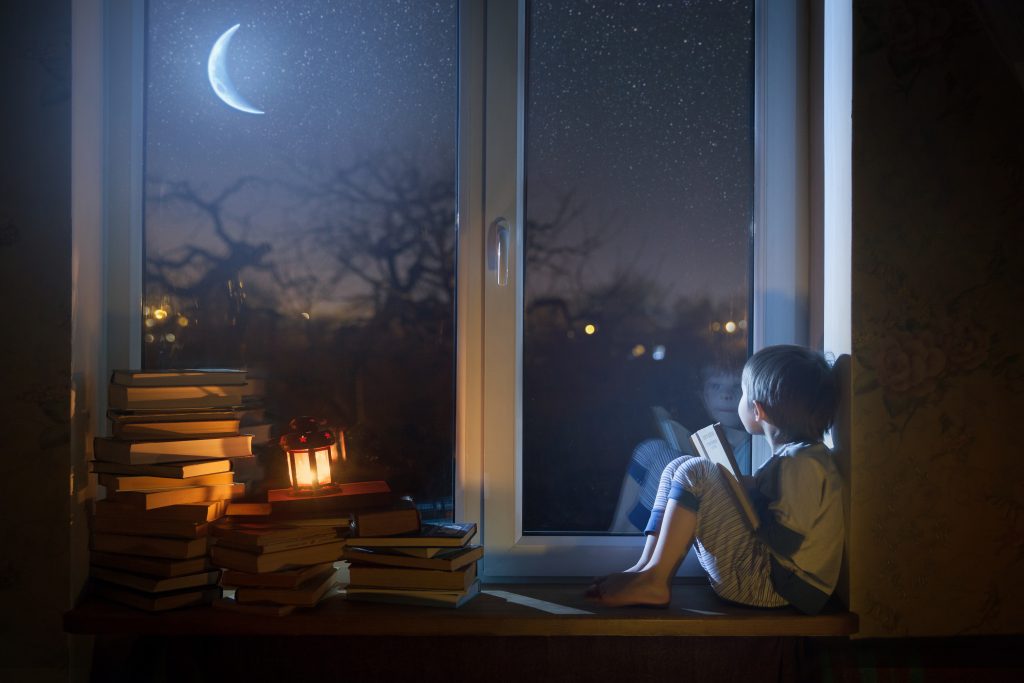 Considering the great things the Moon does for us, all the time we should treat it with respect. And that includes using its online symbols and digital representation in the proper way, just as we’ve shown you.

Believe us when we say, there’s no better time to put it all into practice. With the years going by, and emojis slowly becoming an everyday staple in communication, the moon has seen a rise in popularity in online chatter about nighttime stuff, stunning views of space, or to simply add to a good night wish.

So, the next time you talk about the moon on social media, or in an email or a chat app, we know you know just what to do!